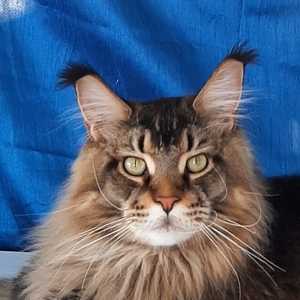 Maine Coon. The origin of the breed.

Maine-Coon breed – is one of the oldest of natural North-American breeds. The name's first part – “ maine" – was given to it by the northeast state of Maine - location, where they were first found. Maine coon still remains state's official breed. There is a number of versions attempting to explain the origin of this majestic, truly kingly breed. According to the first version, the ancestors of Maine-coon are longhair beauties, held at the French royal court by the wife of Louis XVI, Marie Antoinette. It is said, that foreboding the 1971's revolution, she was readying to flee her beloved France and find a shelter in North America. To accomplish that, a special ship was equipped for the journey to Wiscasset. As it is known, Marie Antoinette did not get it into the North America, and was executed by the Convention followers; her cats have made it safely to the New World, where they are said to cross with American shorthair cats, thus giving birth to a new breed. The followers of the other, somewhat mystic theory, tell us that the Maine-Coon is a crossover of a semi-feral cat and... well, a raccoon. This version works well, given that the characteristic for this breed brown tabby pattern (often referred to as "wild paint") involves distinct light stripes going along the spine from the neck to tail-base. These stripes give felines a strong resemblance to raccoons. However, this version is more of a legend, for it is genetically impossible to produce litter by breeding different species. The most trustworthy version is the one calling Maine Coon cats to be the descendants of American shorthair cats, which in their turn have originated from North-American semi-feral cats, and longhair cats brought in large numbers by Vikings (probably the ancestors of Norwegian cat) and by European immigrants in XVIII century (ascendants of Turkish Angora and Abyssinian breeds)

Unusually vivid brown tabby felines were widely spread at Maine's coastline since the beginning of XIX century, as we can judge by their numerous appearances in century's literature. This fact, by the way, verifies the theory of their foreign origin very well. The first reliable notion of Maine cats is made by F. R. Pierce in “The Book of The Cat". Mrs. Pierce, a Maine state American, wrote the “Maine Cats" chapter, which was released in 1903 in England by Frances Simpson from France. Mrs. Pierce's notes were based on her own experience, and included a commentary by contemporary owners and breeders of Maine cats. Mrs. Pierce wrote that there were generations of Maine cats even before Civil War, and that their population was big enough to be noted by 1880. Here is Pierce's description of her own cat - Captain Jenks of the Horse Marines: “здесьбудетотрывокизкниги". She writes also about a Maine cat Richeleu, who won the first in class award at a Bangor cat-show in 1884. By the end of XIX century these cats appear often at cat shows. At the early shows in New York and Boston they also compete successfully with popular Angora cats. In 1895, Maine cat brown tabby Cosie was Best of the best in New York at the Madison Square Garden.

At the beginning of XX century, however, Maine-coon cats have yielded popularity to Persian and Siamese breeds, brought actively from Europe. However, Maine cats have regained their over-the-top popularity by 1950-s. The Central Maine Coon Club appears in 1953, and by 1968 the Maine-coon Breeders and Fanciers Association (MCBFA) was organized, both aiming to make coon-cats more popular. These organizations, what's worth noticing, have raised status of Maine-Coon in felinological society and achieved its official recognition. In mid-seventies, the “Old World" has first seen these cats in Western Germany and, a decade later, in Great Britain.

Appearance
A very large, strongly build and fierce looking cat. Body forms an elongated rectangular. Limbs are strong and high. Massive, sharp outlined head with prominent “box-shaped" muzzle and large, straight-standing, tufted ears. Every feature in the Maine-coon looks like it was designed for life in extreme conditions of northern climate. Dense, water-repellant coat on tail and body, as well as reach furnishings and lynx tips in ears give vital protection from cold and severe weather conditions, while fur in-between toes makes Maine-coon paws broad like snowshoes and saves gentle paw-pads from frostbite. Strong bone-structure, big size and formidable forms are essential for predator. Big eyes and ears are good for survivability, as they increase environmental awareness. Long and prominent face helps getting food from holes and frost ponds and streams. Average body weight of male specimen varies from 9 to 12 kilos, while females weigh as little as 5-7 kilos. All-time record weights are 14-15 kilos. In the feline society, Maine-Coons are often referred to as “gentle giants". 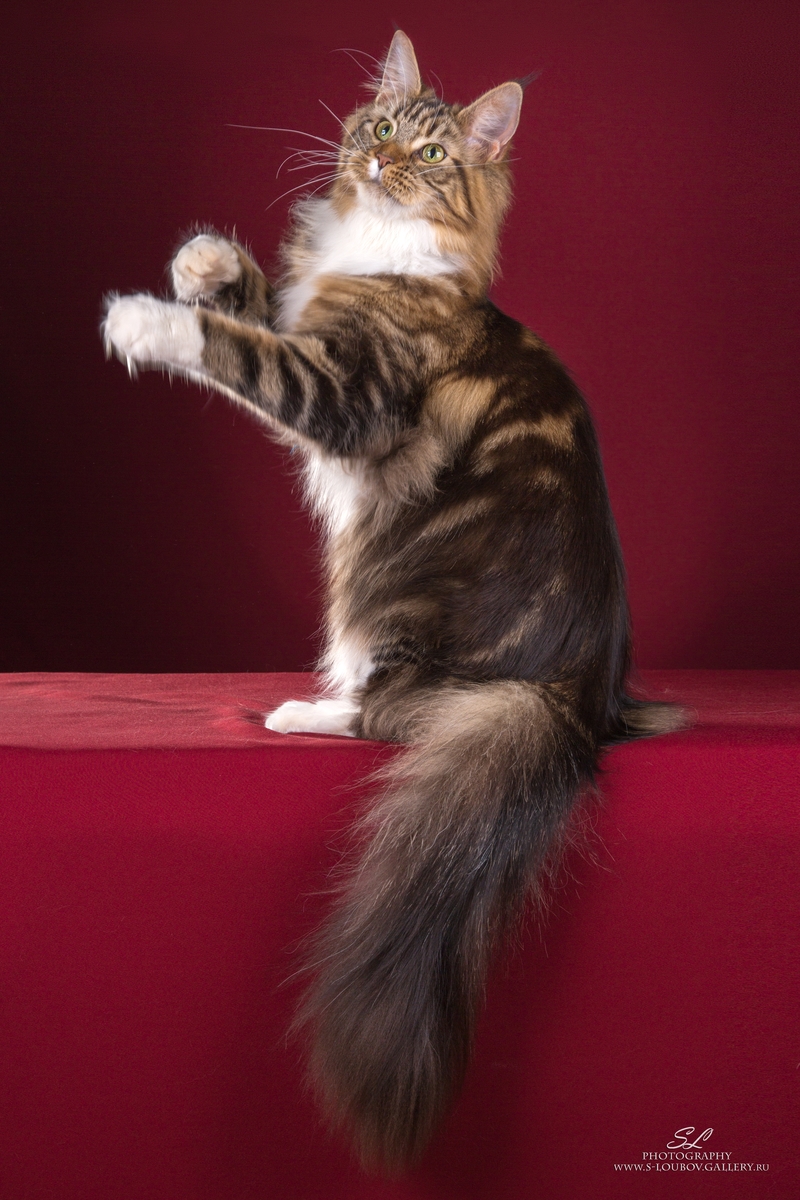 Ears: Large, broad at the base, slightly tilted forward. Set fairly high and straight, with ear-to-ear distance no more than one ear's size. Decorated with lynx tips and inner fur furnishings, which extend beyond outer edge of an ear.

Body/Torso: Muscular, with broad ribcage, elongated and rectangular. Size varies from medium to extra large. Females are smaller than males.

Legs: Strong, rather high, proportional to the body. Straight, if observed from behind.

Tail: Very long, wide at base with pointy tip. Has long, flowing fur.

Coat: Long, uneven, smooth to touch, flowing, with well-defined collar and pants. Undercoat is not dense. Fur on the tail is reach and flowing.

Color: Any color is acceptable, except for chocolate, lilac, pointed, agouti (Abyssinian tabby) in any combinations.

Reasons for disqualification: Aggression (it takes more than two stewards to take the cat from the cage, and/or it attacks everyone including the breeder); tranquilization or doping; signs of acute disease, missing vet pass; coat paint and texture falsification (trimmed, cut, tinted coat); lack of hygiene, dirt in ears; parasitic influence, aural ticks etc.

Maine-coon is an extravert, communicative, confident, strong and balanced cat. They are widely acknowledged as loyal companions, aiming to live with human, that is why, they usually choose a “special" member of the family to stick with. Though being modest and not care-dependent, they follow their human partner everywhere, always ready to join the cause. Maine-coons admire open spaces and active games. They are easily trained, played with and got on with other pets and kids. Coon's litter ages slowly, fully maturing by the age of three or four.

The breed is not care-dependent. They live well in a flat, although the house with a yard is preferred, for they need a lot of activity and play. They are extreme climbers, so a “cat tower" of some kind is strongly recommended. Their coat does not require often care, and can be groomed on a weekly basis, it also molts moderately. Maine-coon can be washed when needed, but not more than once every three weeks.


A “mixed diet", consisting both of dry feed and natural products. The menu should be especially fortified in their growth period - first two years. Rations may include: dry feed, meat, canned feline goods, dairy products and mashes. The breeder is encouraged to use bigger plates, as if small bowls and plates won't work. Water bowl should be at least 30cm-wide and 10cm-deep, it should be always full, and the water should be changed at least twice a day. Ceramic bowls are preferred, at least 15cm-wide and 6cm-deep, supported dog bowls and feeders work well for dry feeds. 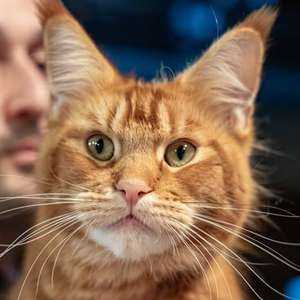 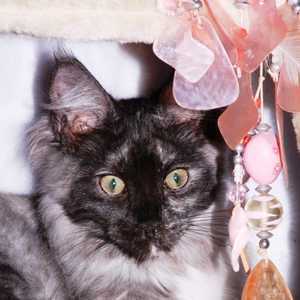 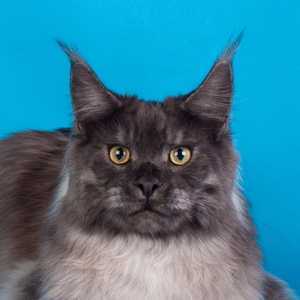