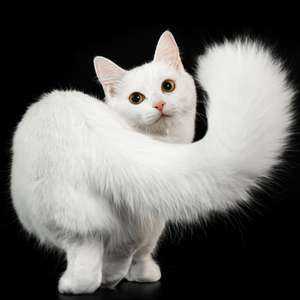 For a most peculiar breed from the USA, its origin history is suitably convoluted and is best served split into two parts. This breeds Old Testament starts in early 30-s, when europe was struck by rumors of unusual short-legged cats, sighted mainly in Germany and England. Too bad another World War broke out rather soon, and felinology was put on a shelf for the time, effectively killing the contemporary breed. Number of sources claim that kangoroo-ish cats were sighted around Stalingrad in 1953, but those only had front legs short, and hardly have any connection with munchkin precursors, more likely being a local population with a unique way of adapting to life in the besieged city.

Regarding actual munchkin, the ones we know today originate from Blackberry, a black and white kitty from Rayville, Louisiana. Kind Sandra Hochenedel found her under a van, and couldn't help but adopt the cat, having assumed short legs are a sign of illness and malnourishment. Yet soon it became clear the mutation is dominant as some kittens shared the unique feature. One kitten, named Toulouse, was given to Kay LaFrance, a farmer and a good friend of Sandra. His progeny was so copious munchkins were rushed into recognised status in just a few years. A breed too unique to be mistaken for any others, its short limbs are impossible to unsee. The mutation does not affect the spine, so munchkins are sometiles called "lengthwise normal", while their legs are about three times shorter than what's normal, still allowing for strength, flexibility and mobility. Due to their naturally smaller size, they weigh as low as 4 lbs and up to 8, some are as small as singapuras.

Head:Shaped as a modified vedge with rounded edges, proportional to the body. High cheeklines are more prominent in males. Flat forehead transitions smoothly into nose and normal-looking muzzle. The chin is strong, but not too protruding.

Eyes: Medium to large in size, almond-shaped, set wide and make for a charming visage. Slightly slanted horizontally, colour is independent from that of coat.


Ears: Medium to large in size, broad at base and rounded at the tip, set high and wide. Only semilonghair cats may have ear tufts.


Neck: Thick and muscular, much more so in males. Body: Long, not compact type, spine ascends slightly from shoulders to tail. Chest is well rounded, hips are strong. Females are much smaller, yet pointy spineblades are not allowed.

Legs: Short, evenly spaced throughout body length, split by knee joints right in the middle. Hindlegs may be somewhat longer than forelegs.

Paws: Round, proportional, and perfectly straight. No signs of twisting inside or outside are allowed.

Tail: Not too thick, tapering to a rounded tip, about as long as the whole body. Munchkins tend to set it vertically as they move around.

Coat: Semilong, smooth and silky to the touch, backed by adequate undercoat.

Despite its shorter legs, munchkins are just as energetic as any long-leg breed. Sure enough, they have trouble jumping and vaulting as high, but what is climbable will be climbed by them. These shorty cats demonstrate uncanny intelligence, and are incredibly friendly and loyal to their owner, while not being a pushover and standing their ground if they must. Quite sociable, munchkins get used to new people quickly, can be walked on a leash and may travel with the owner. Their defining feature allows for prolonged standing, technically sitting, on hindlegs with frontlegs stretched out frontally.

Munchkins are known for habit of making shelters for themselves, so it would be a good idea to get a kitty home where they will feel safe and secure. Extremely curious, they will touch and inspect what they can, so it is best you store things they shouldn't somewhere higher up.
Munchkin coat, however, is a breese to look after, especially the shorthair version, as weekly grooming is about all it takes. SLH variety may need more attention to prevent hair mats from developing, and it would be nice if you wash them every 2 to 4 months with a special shampoo.

Planning for munchkin diet is a feat of responsibility, as when left to their own devices these cats may overeat and risk becoming obese.