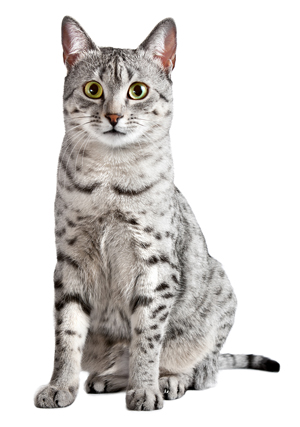 Egyptian Mau is breed is called legendary and for a good reason. As you could have guessed, these cats hail from Egypt, and the word "mau" translates as "cat" from Egyptian too, Egyptians in fact are considered to be the first to domesticate cats, Mau being the descendant Nubian cats, themselves direct descendants of Felis Lybica Ornata, that were revered and protected for centuries, as mice ruining the supplies and snakes killing people in their sleep were a real problem back in the day. First images of similar looking cats are found in egyptian dig sites and date back up to 5000 BC. Those are, however, considered to be stray cats, and first images of home pets appear by 2000 BC. Egyptians were quite serious in their love of cats, viewing direct and divine link between them and the day-night cycle. Just imagine living in ancient Egypt and figuring that cats' pupil turns into a narrower slit when the sun is up high, and then back to round, shining circles when it is done. It doesn't help that the sun god Ra was sometimes referred to as "the great cat", and moon goddess Bastet was depicted as a person with feline head, or sometimes entirely as a cat. These misconceptions, coupled with religiously-dominated society, gave birth to a set of particular laws and customs: cats were meant to be evacuated first from a burning building, or cat owner in grieving for his departed cat was expected to shave off his eyebrows. By late XIX, a peculiar graveyard was found by Beni Hasan village: some 180 thousands of mummified cats are buried in one site, ornate sarcophagi included. The effort that went into this is nothing short of awe-inspiring: mummification quality is pharaoh-grade, scientists were able to study contemporary cat coloration and coat characteristics from the preserved remains.

The modern Mau history kicks off after the WWII, the millenia-old breed has all but degraded into nothingness, but Italian, French and Swiss fanciers combined effort has proven fruitful. Turns out there is a Russian trace in Mau development: Duchess Trubetskaya, by then an Italian subject, has received a generous gift from Cairo noble in 1953: a mature 11 year old black cat Grigorio, silvery Lilu and smoky Geppa. First kittens appeared in the same year, and FIFe office in Italy was dutifully notified, and first New-Gen Mau have appeared in Rome cat show by 1955. Three years latter Trubetskaya has moved to USA, and founded Fatima Cattery. CFA was one of the first to acknowledge the breed, although initially only the following colours were officially recognized: silver, bronze and smoke, while black cats were only used for breeding. TICA specialists have devised a comprehensive breed standard in 1988, and FIFe has only officially acknowledged the breed by 1992, despite individual fanciers being into breed since 50-s.

Currently, 3 strains of Mau exist: American strain, the baseline created by breeders striving to re-create the breed matching egyptian paintings and contemporary descriptions; Indian strain with aboriginal indian cat dna; and Egyptian strain utilising egyptian stray cats in breeding. Egyptian Mau are experiencing a kind of a renaissance in Europe since 1980-s, and still they are a bit of a scarcity. 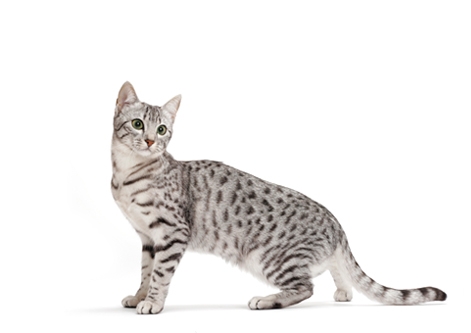 A medium-sized cat, Abyssinian type, more muscular than most orientals. The breed defining feature is their characteristic tabby coat.

Eyes: Large, wide open and set somewhat far apart. Mau eyes have a characteristic shape, neither round nor almond, and are very expressive, because of which Mau generally look amused. Allowed coloration varies from bright green (young gooseberry) to amber for young females. Eye color develops slowly and matures by 8 to 18 months. Ears: Medium to somewhat large in size, set far apart, broad at base and tapering to a modestly pointy tip. Auricles are decently firm and generally point slightly forwards, ever anxious, their insides are evenly coated with short, thin hair. Lynx tufts are preferred.

Body: Medium in size and length, adequately muscular, with wide and angular shoulders and dense skeleton. Belly skin always has some folds that allow Mau to reach out longer with their legs, enhancing their mobility.

Legs: Medium in length, muscular, with hindlegs being shorter than forelegs. Leg coat often has ring or stripe pattern.

Coat: Short, silky and clinging, known for its protective qualities.

Mau are lively and playful, easygoing and not aggressive cats that value calm and quietness. Very friendly and social they are tender with their owner and are not at odds with other pets, other humans however make them feel somewhat uneasy. These cats are known to be trainable because of their good memory and wits. Easily adaptable to city flat conditions, they still can and should be taken outside or walked on a leash every now and then. 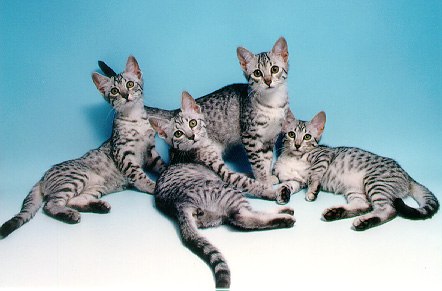 Considered to be the fastest among home cats, they can reach speeds of up to 58 km/h, which means it is necessary for them to be able to play off that energy, this is further necessitated by their tremendous appetite, which coupled with sedentary lifestyle may lead to obesity. Apart from running fast, Mau are often fond of water and thus can be washed easily, which adds to the ease of maintenance that otherwise requires nothing but a brushing on a weekly basis.

Gourmets that they are, Mau would never turn down a feast, which adds to owners' responsibility of dietary planning and overeating prevention.

Breeds relative to or derived from Mau: