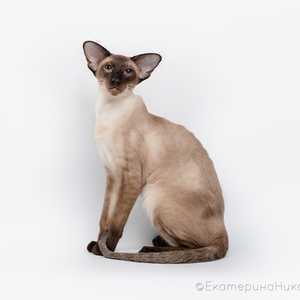 Designazione:
SIA
Gruppo:
Siamese
Categoria:
Principale
Origine :
Thailand
Si raccomanda:
for families who stay at home most of the time

These are some of the most peculiar felines out there. Their first notion is at least 500 years old and belongs to the Thai Book of Royal Art. Ivory-coated and spotted felines were considered to be extremely luxurious and were held at royal courts and temples among Siam. There is a legend saying that royal Siamese maidens used to store their rings on feline’s tails, and those would normally bend their tails to not lose any. The other version states that these cats were used to guard precious vases by holding them with their tail and gazing at it, that one explains their early bent tails and squinting eyes, something we consider a flaw nowadays. Their modern history is also connected with those famous and in power. Oven Gold, the ambassador of Britain in Thailand has brought two siamese felines Pho and Mia, and their kittens became the first ever breed champions on a 1885’s cat-show. August Pawi and president Karno’s nephew became the first Siamese fans in France. To add more, a professor from Oustalet museum has written a book on presidents relative’s felines. The first notion of the breed in modern history is dated 1973 and is made by Peter Pallas, who has made notes on white asian felines with darker paws.

Siamese felines have been a mandatory of the cat show since the 1872 - the year when Dorothy Newell's siamese was a particular success in Crystal Palace. Probably, mrs Dorothy was the first serious siamese fancier, too. The first standard was developed by SCFF specialists in 1892, yet it were englishmen who have organised the first fanciers club in 1901. Despite the fact that first Siamese were brought to the USA in 1890-s, they have only became popular a quarter of a decade later.

Being the most widespread among shorthairs, these felines weigh from 5 to 12 lbs. It has an elongated, flexible body with nicely developed muscles. It’s neck and tail are also long, which when coupled with a wedge shaped head gives it a streamlined look. The breed is defined by its short coat and colour-point pattern. There are four archetypes of the breed: American type - snakelike head, narrow skull and extremely narrow eyes accented by huge ears, longer neck and limbs and “ball-joint” bones giving it a slightly toyish look. The English type - an even triangular head, large ears and a somewhat shorter body. Applehead type, a rounder and more original type developed by the TCA. Thai - an ancient type with rounder head, developed by German fanciers using british and european shorthair.

Head: Medium size, in the form of tapering prolonged wedge, with straight lines from the nose to the upper edge of the ear. There are 2 varieties: English - with blunt edges, and American - more prolonged. The skull, when viewed from the profile, is a bit convex. Cheeks are flat, except in adult males, where jowls are allowed. No visible edges of the cheekbones. Muzzle continues the form of the edge, is quite long, narrow, but not too fine. No muzzle break. Nose is long, straight, continuing the line of the forehead without any break. Chin is strong, forms one line from the tip of the nose to the tip of the chin.

Ears: Very large, broad at the base, rather pointed. Set to continue the line of the wedge. Set rather low.

Tail: Very long, thin, Narrow at the base, tapering to a fine and thin point. Whippy.

Colors: Colorpoint. Color: body has a light color, only points have colored coat: legs and feet, tail, ears and a “mask” on the head. Points’ color should be even and contrast with the main color.
Classical color for Siamese are:
- Seal point: body even pale fawn to cream, warm in tone, shading gradually into lighter color on the stomach and chest. Points are of deep seal brown color;
- Blue point: body bluish white, cold in tone, shading gradually to white on stomach and chest. Points deep blue;
- Chocolate point: body ivory with no shading. Points are of milk chocolate color, warm in tone.
- Lilac point: body glacial white with no shading. Points are of frosty grey color with a pinkish tone.
Besides, there are other colors:
- Red point: body clear white with any shading in the same tone as points. Points: bright apricot to deep red, deeper shades preferred, with lack of barring desirable.
- Cream point: body clear white with any shading in the same tone as points. Points: pale buff cream to light pinkish cream, lack of barring desirable.
- Parti-color (tortie) point colors of different color variations
- Lynx (tabby) point colors of different color variations
Seal point color was the one accepted in Siamese breed and it is still one of the main colors in this breed. Some systems accept only 4 “main” color varieties in Siamese breed (CFA), other color variations are referred to another breed (Colorpoint Shorthair).
Siamese kittens are born white and points become vivid only on the 5th day. Final color the cat gets closer to 1-1,5 years. With age points and body color get darker (especially in seal point).
Siamese (pointed) coat color is very “tender” and reacts on (changing the tone of the points and body color to darker) the surrounding temperature. So, the colder it gets, the darker color will become. So, optimal temperature for the show cat of pointed color is - 25-28°C.

Penalize: pale eye color, improper (i.e., off-color or spotted) nose leather or paw pads. Soft or mushy body. Visible protrusion of the cartilage at the end of the sternum under normal handling.

Disqualification on the shows: any evidence of illness or poor health. Weak hind legs. Mouth breathing due to nasal obstruction or poor occlusion. Emaciation. Visible kink. Eyes other than blue. White toes and/or feet. Incorrect number of toes. Malocclusion resulting in either undershot or overshot chin. Long hair.

Disqualification for all breeds: Amputated claws, cryptorchism, deafness. Any bone deformation in the head, body, limbs.

Siamese felines are rather active, sociable and talkative, constantly demanding attention and suffering from loneliness. A true fact, they may succumb to depression if the owner doesn’t show up for some time. Being somewhat picky, demanding and unpredictable they are also blessed with loud voice and a lot of intonations, most of which are oftenly considered unpleasant. Siamese should entertain your children nicely, but being as envy as they come, they are constantly at odds with other pets. As most orientals, these cats savor warmth and comfort, while being particulary vulnerable to the opposite.
Siamese are blessed with early puberty and average litter yield, first heat comes usually at 5th month and then they keep coming every two weeks all year round.
They are known to build up stress with eating disorders being it’s normal sympthoms.

Their short coat makes it easy to look after them, use special glove or even wet hand and brush them once or twice a week to keep them at their finest. If you see your feline acting nervously you would want to distract them with a treat or toy, deal with the irritation. Separating kittens and feeding mom is strongly advised against, for it may result in bad habits like coat sucking.

Balanced rations are required to counter their natural leaning towards obesity. Only high quality dry feeds and preserves are allowed.